"Parade of Jibboom Club No. 1 of New London, Conn."

Photograph; hand printed on mat at bottom "Parade of Jibboom Club No 1 of New London Conn./ A social club formed by men who had been/ on at least one whaling voyage." Men posing around and on a float made to resemble a whaling bark, drawn by horses, some men in costume. Rubberstamped on back of cardboard "HALE'S STUDIO,/ NEW LONDON, CONN./ A Specialty of Photographing/ FAMILY GROUPS, PICNIC PARTIES, Marine Views,...and..." and handwritten in ink "#1442." Mounted. Jibboom Club No. 1 formally organized January 29, 1891. storefronts identified: "Wallace R. Johnson, Real Estate; A. B.[?] Lippitt, Jr., Attorney; Charles W. Strickland; Barrows the Shoeman. Quarters at Bank and Golden Streets, where a museum of sorts developed. Tools and implements were contributed over the years. 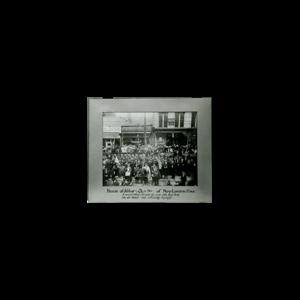