Full model of the packet ship ISAAC WEBB. This model was made by Charles G. Davis, whose craftsmanship remains an inspiration to model builders today. Davis cut away a section of the model to show the typical triple deck arrangement common to many large merchant ships employed in the European trades of the 1850s. She is built at a scale of 3/16" to 1'. The 185-foot packet ship ISAAC WEBB was hailed as �a model of the shipbuilders art� when she was launched from the busy New York City shipyard of William Webb in 1850. As part of the Black Ball Line, she sailed in scheduled service between New York and Liverpool, making about four round-trips per year between 1850 and the end of the Black Ball Line in 1879. Packet service was regular but far from routine. During the Civil War, the ISAAC WEBB was nearly destroyed by a Confederate commerce raider. However, she had 647 immigrant passengers on board, so she was ransomed rather than burned. In 1854 she rescued the crew and passengers of the foundering ship William Russell, and in 1866 three of ISAAC WEBB crew died of frostbite during an especially stormy December crossing. 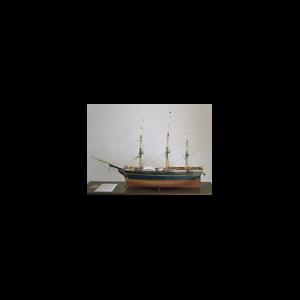 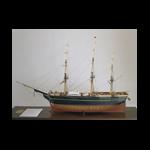 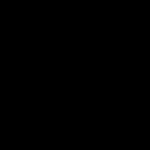