The extreme clipper ship ELECTRIC was launched at Mystic, Connecticut, in 1853, and her first master was Gurdon Gates. Developed as a recognizable American type in the 1840s, the clipper ship, like the ELECTRIC, had a long, sleek, narrow hull, sharp bow, and tall rig with a large spread of sail. Although most clipper ships were engaged in the Pacific trades, speeding goods to San Francisco during the gold rush, or dashing home with tea from China, the ELECTRIC spent most of her time in transatlantic service, sailing between New York and Liverpool, Le Havre, or Hamburg. Captain Gates commanded the 185-foot ship for four years. 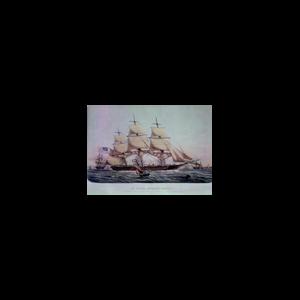