Cutting in a Whale / “The Constitution and Guerriere in close Engagement”

Scrimshawed tooth. On one side, whaling scene showing a ship cutting in a whale with three boats away in the foreground. Reverse side shows a naval engagement copied from "The Constitution and Guerriere in close Engagement" in Horace Kimball's derivative "American Naval Battles" (Boston, 1831) - a reverse image of "The Constitution in Close Action with the Guerriere" in Abel Bowen's "Naval Monument" (1816), after a Michele Felice Corne (1752-1845). The positions of the British and American taffrail flags (national ensigns) differ among the various images. Inked in red and black. 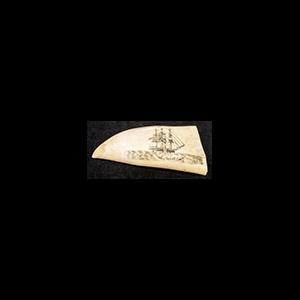