The sleek lines of the U.S. Naval Auxiliary Force vessel GLOUCESTER hint at her former years as J.P. Morgan�s private yacht CORSAIR. After her launch by Neafie & Levy of Philadelphia in 1891, Morgan used the 240-foot CORSAIR for seven years before selling her to the U.S. Navy, which renamed the vessel GLOUCESTER and added rapid-fire guns.

The ship fought at the Battle of Santiago in company with the smaller converted yacht VIXEN and was instrumental in sinking the Spanish torpedo boat PLUTON and driving the torpedo boat FUROR ashore during a running fight at 17 knots. Several weeks later, on 25 July 1898, the GLOUCESTER entered and captured the port of Guanica, Puerto Rico. She also participated in the capture of the port of Ponce, Puerto Rico, and in concert with the USS WASP took the port of Arroyo. Lieutenant Commander Richard Wainwright, who was executive officer of USS MAINE at the time of her loss, commanded the GLOUCESTER and was hailed as a hero.

After the war the GLOUCESTER served in a number of capacities, including three years as a school ship at Annapolis. Reactivated in 1917, she conducted harbor patrols in New York until her final decommissioning in 1919. 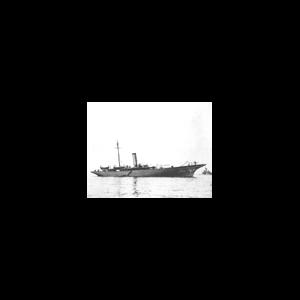