Glass negative by Capt. George Comer, taken at Repulse Bay in Hudson Bay, 1902. Depicts the whaling schooner ERA frozen in the ice. Original caption is as follows: "Showing the vessel before she came up after the banking had been removed." The weight of winter snow and ice would cause the vessel to settle lower in the water than normal. It would remain frozen in this position until it eventually "came up" in the spring. Information from original envelope identifies this as photo 166, # 92. The number 92 is etched into plate. 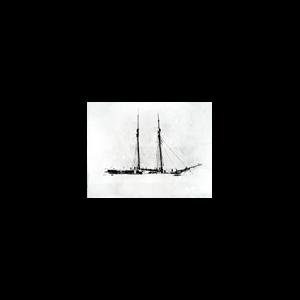