Glass negative by Capt. George Comer, depicts the crew of the whaling schooner ERA. Comer identified this image as follows, "Crew of the schooner ERA, 1897-99." Man at far right is probably Brass Lopes, a boatsteerer who made a number of voyages with Comer. Information from original envelope identifies this as Photo #2, # A58. Identical to 1983.25.50, which has the following identification on rear: "Some of the ERA'S crew/ taken up north/ note the large seal skin on/ main gaff/ The man at the right was with/ me 20 years (Bran Soper(?))".. [probably referring to Brass Lopes] 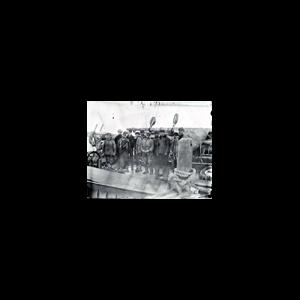