Glass negative by Capt. George Comer, taken at Cape Fullerton, Hudson Bay, on February 16, 1904. Comer identified this image as follows, "...showing the tattooing of the Southampton Natives...The woman is an Iwillic [sic] native fixed up for the picture, she is a young girl known as Jumbo." This is one of a group of photos taken by Comer to record facial tattooing of various Inuit groups of Hudson Bay. He had Aivilik women paint their faces to simulate the tattooing styles of various other groups. Information from original envelope identifies this as Photo 15, # 30. The number 31 is etched into emulsion on plate. Lantern slide 1966.339.82 was made from this negative. 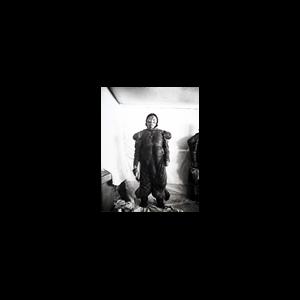