Glass negative by Cap t. George Comer, taken at Cape Fullerton, Hudson Bay, on February 18, 1904. Comer identified this image as follows, "...showing tattooing of the "Nectchellic." These people, who resided in the territory northwest of the principal American whaling grounds, are more accurately designated as the Netsilik. This is one of a group of photos taken by Comer to record facial tattooing of various Inuit groups of Hudson Bay. He had Aivilik women paint their faces to simulate the tattooing styles of various other groups. Information from original envelope identifies this as Photo #95, #37. The number 37 is etched into lower right of emulsion on plate. 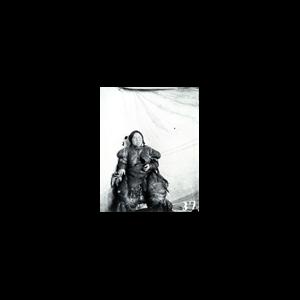