Glass negative by Capt. George Comer, taken at Cape Fullerton, Hudson Bay, on February 16, 1904. Comer identified this image as follows, "...this shows the tattooing of the Kenepitic tribe ." The Inuit Comer referred to as the Kenepitic or Kenepitu were from the Chesterfield Inlet region, and are more appropriately designated as the Qaernermiut. This is one of a group of photos taken by Comer to
record facial tattooing of various Inuit groups of Hudson Bay. He had Aivilik women paint their faces to simulate the tattooing styles of various other groups. Information from original envelope identifies this as Photo 180, # 32. The number 32 is etched into emulsion on plate. 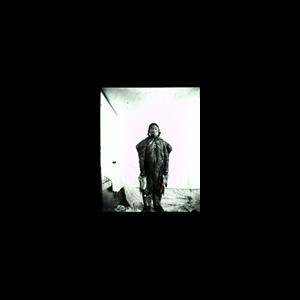