Glass negative by Capt. George Comer, taken in Hudson Bay, ca. 1897-1899. Depicts two men standing in front of covered whaleboat. They are identified by Comer as the "steward and cook, schooner ERA, 1897-99." In Comer's journal for the 1897 voyage he identifies the steward, whose name was George Reddick, as being a black man from the American south. He states that the cook, Alexander Samuel, is from the island of St. Helena. He also indicates that the steward was one of the men rescued by Comer and his crew the previous year, from the wrecked whaling vessel DESDEMONA. Information from original envelope identifies this as Photo 199, A 57. 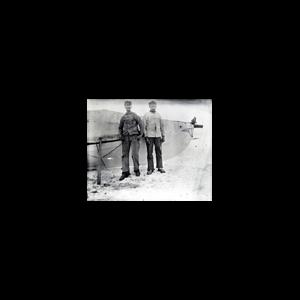