Gelatin glass negative of Merritt-Chapman & Scott Corp.; floating derrick CAPITOL hoisting bus to steamship HELEN; three busses on derrick deck, two "ESPECIAL", one "SAN JUAN"; see 1964.660.3428; see print 2008.28.6.20 from this negative; caption from "Black Horse of the Sea", page 25, "More than a hundred American-built busses such as these are now running on the good roads of Porto Rico; all were placed aboard ship by the floating derricks. Like many other jobs that came to the Black Horse fleet, these were quick, 'careful' lifts rather than heavy ones." 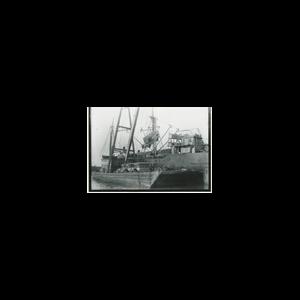 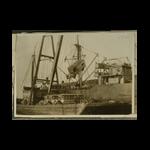