Poster; red, white, blue and black image shows five men posed by hatch door; all wearing U. S. NAVY hats and have blue stars over their heads; text below reads "the five Sullivan brothers/ 'missing in action' off the Solomons/ THEY DID THEIR PART"; marked at bottom "OWI Poster No. 42. Additional copies may be obtained upon request from the Division of Public Inquiries, Office of War Information, Washington, D.C. U.S. GOVERNMENT PRINTING OFFICE: 1943-0-510254"; George, Francis, Joseph, Madison and Albert Sullivan all died when the U.S. naval vessel JUNEAU was sunk the morning after the Battle of Guadalcanal, 13 November 1942; US Navy vessel THE SULLIVANS was named for them and launched April 1943. 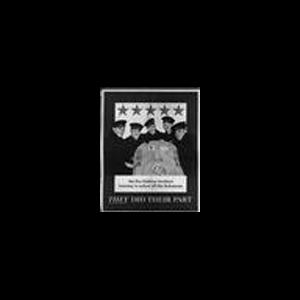