Photograph from the collection of Captain George Comer (1858-1937) of East Haddam, Connecticut. Photo by Capt. Comer who identified this group as the crew of the whaling schooner ERA, 1897-99. Caption on reverse is as follows: "Some of the ERA'S crew taken up north. note the large seal skin on/ main gaff. The man at the right was with/ me 20 years (Brass Lopes)." Brass Lopes was a boatsteerer who made a number of voyages with Comer. Identical to 63.1767.55. 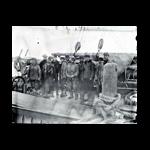