Photograph from the collection of Captain George Comer (1858-1937) of East Haddam, Connecticut. Photo taken by Capt. Comer at Repulse Bay, Hudson Bay on January 24, 1902. Depicts a group of five Inuit. Comer's typewritten caption on rear identifies this group as "Natives of the Chesterfield Inlet Tribe/ West coast of Hudson Bay." The caption for the original glass negative for this images identifies the people as "Iglulic natives." This designation seems more likely, since the Iglulic occupied the Foxe Basin area, much closer to Comer's Repulse Bay location, where the photo was taken. The number 87 in the image was etched into the original photographic plate. 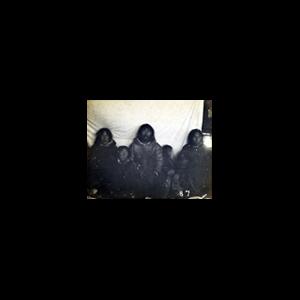