Photograph from the collection of Captain George Comer (1858-1937) of East Haddam, Connecticut. Photo taken by Capt. Comer at Cape Fullerton, Hudson Bay ca. 1897-1912. Depicts a number of Inuit with sleds and equipment. Comer's typewritten caption on rear identifies this as "Loading and moving to another location in the spring. Having been near the vessel during the winter. Cape Fullerton, Hudson Bay." Identical to glass negative 1963.1767.141. 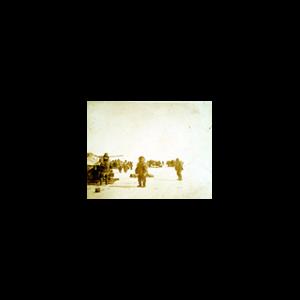