Photograph from the collection of Captain George Comer (1858-1937) of East Haddam, Connecticut. Photo by Capt. Comer, taken in western Hudson Bay, 1900. Depicts two Inuit engaged in game of strength on deck of schooner ERA. Caption on reverse identifies this as "Natives playing their games on board the ERA." Also identified elsewhere by Comer as "Native eskimo game on deck to see which man has the strongest arm." Identical to 1966.339.61. 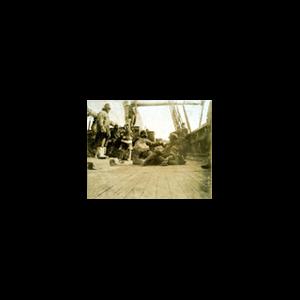