5x4 safety negative photographed by Rosenfeld and Sons during the time of the Off-Sounding Race in 1955. Image of BOUNDING HOME undersail, starboard beam view on a port tack, sailing in and winner of the Class A division. Later known as BOUNDING HOME and then SEA SAGA, her original name was SAVANNAH and she was a 52'11" auxiliary schooner designed by Ford, Payne & Sweisguth and built by Minneford Yacht Yard, Inc. of City Island, New York in 1933. Her dimensions changed by the time she became BOUNDING HOME and length overall was 53'1". By 1949 she had been altered to a staysail schooner. She became BOUNDING HOME when owned by William Ziegler, Jr. starting in 1951. Stamped negative sleeve info.: "146634F / OFF-SOUNDINGS 1955 / [Box] 5438". Handwritten: "A11 / Bounding Home". Videodisc and frame number of a print: 1-49699. CREDIT LINE: Mystic Seaport, Rosenfeld Collection. 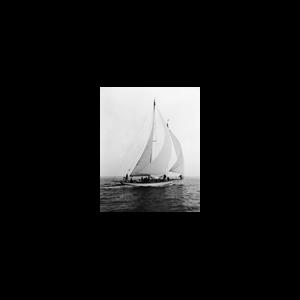