35mm negative frame #31 photographed by Rosenfeld and Sons between September 20th and the 26th during the time of the America's Cup races of 1958 held off Newport, Rhode Island. Image is a closeup view taken from a chase boat on the starboard side of COLUMBIA, undersail, on a port tack with part of the cockpit and deck visible with the mainsail boom overhead and equipment and crew laying on the deck. COLUMBIA was a 69'7" 12 Meter sloop, sail #US16, built for the America's Cup defense in 1958 by Henry B. Nevins, Inc. of City Island, New York from designs by Olin Stevens of Sparkman and Stevens and rigged by Rod Stevens. Stamped neg. sleeve info.: "161421F / [Box] 5678 / AMERICA'S CUP 1958". Handwritten: "Box 5678". CREDIT LINE: Mystic Seaport, Rosenfeld Collection. 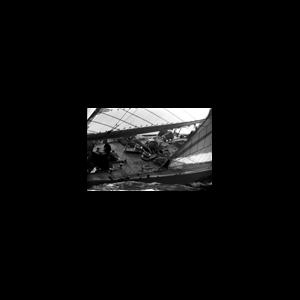