Kodak safety negative (#18) taken by Rosenfeld and Sons on October 24, 1942. Port bow view of the submarine chaser PC1191 underway. Vessel seen on sea trials off the New Jersey coast in 1942. This World War II era PC was steel hulled, was twin diesel propelled and armed with a dual-purpose 3"/50 and 40mm gun. Later the 3"/50 was replaced with a single Bofors 40mm and 3 single 20mm guns were added. PCs carried a considerable amount of detection and ranging gear for locating submarines. They were capable of a speed of about 18 knots and were highly maneuverable. 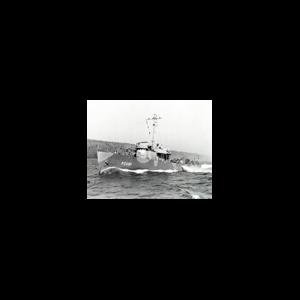