Photograph; view of 12 crew of the PRESIDENT ROOSEVELT on deck of vessel, including Lt. Kenneth Upton [center], who rescued the crew of the British freighter ANTINOE, January 1926; printed on label on back "BeSH(?). RESCUED CREW OF "ANTINOE" HOME." and "The rescued crew of the ANTINOE' who were/ saved by the gallantry of officers and men of/ the American liner "PRESIDENT ROOSEVELT", arrives/ at PLYMOUTH yesterday (SuW)." and "Photo shows the men who actually rescued the/ ANTINOE's crew. In centre is Lt. UPTON, of whose/ heroism many stories are told."; also attached to back is label with contents illegible due to pencil scribbling. 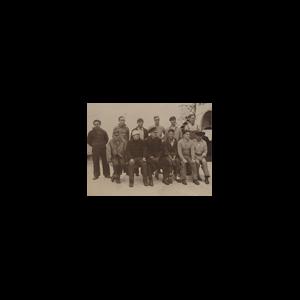