Soft negative by F. Slade Dale of the four-masted coastal schooner HERBERT L. RAWDING. Taken while vessel was en route with freight, from Miami, FL to New Bedford, MA on the week of April 27, 1926. The photographer was hitching a ride home from a voyage south he had taken aboard a twelve-foot sneakbox. View of the vessel's deck looking toward the stern. Clear view of one of the booms and its connection to the lower part of the mast. Some coiled rope is seen on the deck along with a small boat, possibly the sneakbox Slade had sailed south on. Barrel seen on far left. Negative to prints 2001.69.21 and 2001.69.22. 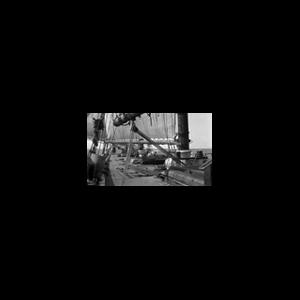