Gelatin print by F. Slade Dale of the four-masted coastal schooner HERBERT L. RAWDING. Taken while vessel was en route with freight, from Miami, FL to New Bedford, MA on the week of April 27, 1926. The photographer was hitching a ride home from a voyage south he had taken aboard a twelve-foot sneakbox. Deck view from the helm. Cabin door seen open in the foreground, sail laid out on deck, and ropes seen scattered about. Ship's bell seen mounted to the left of the wheel. Print from negative 2001.69.30 and same print as 2001.69.32. 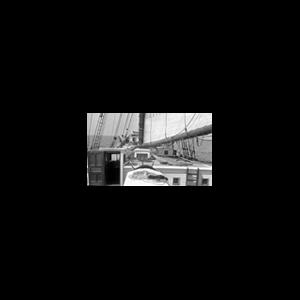