Crew on deck securing the lines

Soft negative by F. Slade Dale taken aboard the four-masted coastal schooner HERBERT L. RAWDING. Taken while vessel was en route with freight, from Miami, FL to New Bedford, MA on the week of April 27, 1926. The photographer was hitching a ride home from a voyage south he had taken aboard a twelve-foot sneakbox. View of the crew working hard on deck to secure lines. See prints 2001.69.115 and 2001.69.116. 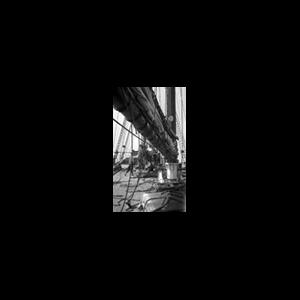