Grumman Seaplane amphibian flying above the Statue of Liberty, 1946

5x7 safety negative photographed by Rosenfeld and Sons on December 30, 1946. View taken from a second aircraft of a Grumman Seaplane flying above the Statue of Liberty. The Grumman Aircraft Engineering Corporation, later Grumman Aerospace Corporation in 1978, was a leading producer of military and civilian aircraft of the 20th century. Founded on December 6, 1929, by Leroy Grumman with Jake Swirbul and William Schwendler, its independent existence ended in 1994 when it was acquired by Northrop Corporation to form Northrop Grumman. The Statue of LIberty is a monument that was given to the U.S. government from France as a gift of friendship. It was designed by Frederic-Auguste Bartholdi and assembled on Bedloe's Island (Liberty Island) in New York Bay and dedicated Oct. 28, 1886. Stamped neg. sleeve info.: "115454F / [Box]4922". Typed on negative sleeve: "Grumman Aircraft Corp. / 12/30/46". CREDIT LINE: Mystic Seaport, Rosenfeld Collection. 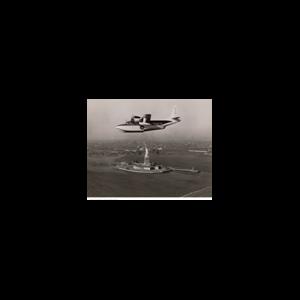