Launching of the dreadnaught ARIZONA

5 x 7 glass plate negative taken by Rosenfeld and Sons at the New York Navy Yard, Brooklyn, NY on June 19, 1915. Starboard bow view of the launching of the battleship USS ARIZONA (Battleship No. 39). Several people seen aboard vessel waving arms and hats, bow of vessel is decorated with stars and stripes. Men also seen in the foreground looking up toward the launching vessel. This launch was sponsored by Miss. Esther Ross, daughter of a prominent Arizona pioneer citizen, Mr. W.W. Ross of Prescott, Arizona. She was commissioned at her builders yard on October 17, 1916, Capt. John D. McDonald in command. She was eventually destroyed during the attack on Pearl Harbor, December 7, 1941. Her wreck is now a national shrine and she was awarded one battle star for her service in World War II. 1,103 of her crew died during the attack. Handwritten on original negative sleeve: "Launching of Arizona / Box 232". 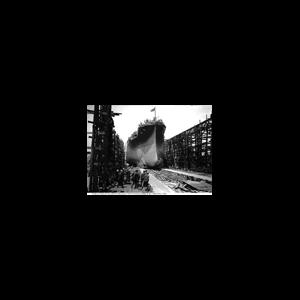 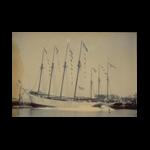