35 mm color slide photographed by Rosenfeld and Sons in February of 1978. Close, center view of the sloop EVERGREEN, sail #KC 64000, undersail. Vessel seen close hauled from the stern. Vessel has a reefed main sail and is on a port tack. Five men seen aboard. Handwritten on acid mount: "EVERGREEN". Printed on front of mount: "2/ FEB 78N6". Printed on back of mount: "Kodachrome/ SLIDE/ PROCESSED BY KODAK". Transom of vessel reads "RHYC" (Royal Hamilton Yacht Club). EVERGREEN was a C&C designed boat, radical for her time. She had a four spreader rig, a complex hydraulic system and was built of carbon fiber and epoxy honeycomb. Her skipper in 1978, Tim Stearn, reported he had all he could do to keep her mast up. She won the Canada's cup in 1978 after much controversy, and after being made to seal the hatches, shorten her spinnaker pole, and re-cut some sails. This shot was probably taken at the SORC (Southern Ocean Racing Conference). CREDIT LINE: Mystic Seaport, Rosenfeld Collection. 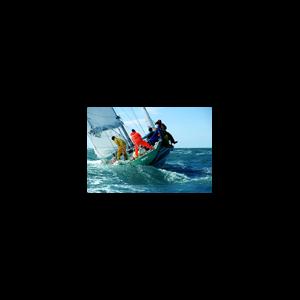