35 mm color slide taken by Stanley Rosenfeld at the trial practice for the America's Cup, 1970. Up close view of the crew 'coffee grinding' or operating the winch below decks. Three crew members visible, sail bags seen hanging to the left. Handwritten on slide mount: "INTREPID/ 1970/ DUPED/ BOX 016-11-05/ r-25/ R". Printed on mount: "BY STANLEY ROSENFELD/ 3 JUL70N". Printed on reverse: "Ektachrome/ TRANSPARENCY/ PROCESSED BY Kodak". INTREPID was a US America's Cup defender, 1967. Designed by Olin Stephens, plus a new design added by Dick Carter of Boston added on a flap on the trailing edge of a shortened keel for stability. Backers were: William Strawbridge (manager), Harold S. Vanderbilt, Patrick E. Haggerty, Burr Bartram. Crew: Rod and Olin Stephens and others for a total of 16. Mosbacher and Romagna designed the ship layout so that the crew was evenly distributed overall and most of the winches were below deck. Halsey Herreshoff suggested a lower boom which would improve the mainsail power upwind. Sailmaker: Ted Hood. America's Cup defender again in 1970. Redesigned by Britton Chance, Jr., who added 2' at the waterline and made her heavier. 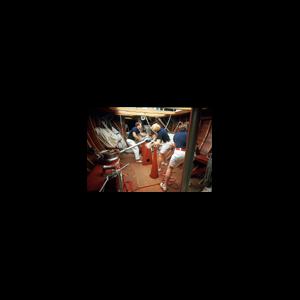