4 x 5 Kodak safety negative taken by Rosenfeld and Sons off Newport, RI on June 20, 1937. Posed view of Mr. Sopwith at the wheel of ENDEAVOUR II. Four crew members visible along with Mrs. Sopwith, all seen standing on the deck. Mr. Sopwith is posed with both hands on the wheel, looking directly into the camera. He is seen in a dark jacket wearing a cap, and has a pipe in his mouth. Stamped on original negative sleeve: "80910F JUN 20 1937". Handwritten on sleeve: "Mr. Sopwith at wheel". Thomas Octave Murdock Sopwith was owner and skipper of the America's Cup challengers ENDEAVOUR (1934) and ENDEAVOUR II (1937). An aviation pioneer, Sir Thomas gave Britain its finest fighter planes during three wars and designed the aircraft that brought down Germany's legendary "Red Baron" during World War I. In his early years he was a speedboat enthusiast and drove MAPLE LEAF IV for E. Mackay Edgar during the 1912 Harmsworth Trophy Race. 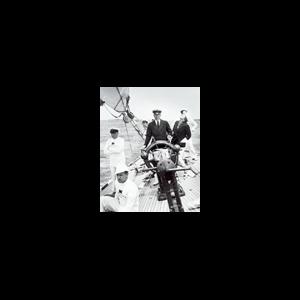