5 x 7 glass negative photographed by Rosenfeld and Sons circa 1915. Closeup view of the port side of the passenger steamship S/S GEORGE WASHINGTON leaving port from New York City bound for Bremerhaven, Germany. Passengers seen tossing streamers and some waving American flags. S/S GEORGE WASHINGTON, later named CATLIN, was a 723 foot passenger liner built by Vulkan in 1909 for the North German Lloyds Line. Her power was: twin-screw, wireless, quadruple-expansion engines, 4 masts, 2 funnels 37,000 tons displacement, 20,000 hp. She was seized by the US in 1917, and converted to a troopship. After World War I she was employed by the US MAIL. In 1921 she was sold to US lines, reconditioned for trans-Atlantic service. In 1940 outfitted as troopship for Word War II and renamed CATLIN, then back to GEORGE WASHINGTON after the war. 1942 overhauled, now 1 funnel. On Jan. 16, 1951 she was gutted by fire at Baltimore, Maryland. On Aug. 1951 her hull was broken up. No negative information from sleeve. CREDIT LINE: Mystic Seaport, Rosenfeld Collection. 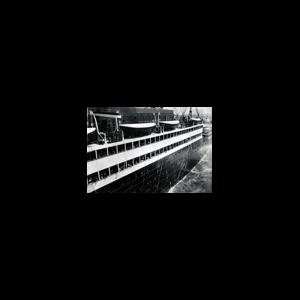