8 x 10 gelatin silver print taken by Rosenfeld and Sons in 1967. Port beam view of the 12 meter sloop INTREPID (US 22) under sail with her spinnaker set. Stamped on back in blue: "PHOTO BY / STANLEY ROSENFELD / MORRIS ROSENFELD & SONS / PHOTOGRAPHIC ILLUSTRATORS / 163 WEST 23RD ST., N.Y. 10011 / PHONE: 989-2404". INTREPID was a US America's Cup defender in 1967. She was designed by Olin Stephens, plus had a new design added by Dick Carter of Boston who added a flap on the trailing edge of a shortened keel for stability. Backers were: William Strawbridge (manager), Harold S. Vanderbilt, Patrick E. Haggerty, Burr Bartram. Crew: Rod and Olin Stephens and others for a total of 16. Mosbacher and Romagna designed the ship layout so that the crew was evenly distributed overall and most of the winches were below deck. Original negative 1984.187.183427F. 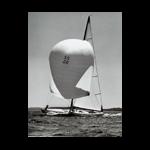