4 x 5 copy negative made from a print, made from a 5 x 7 glass plate negative. Image taken by Morris Rosenfeld on October 21, 1922. Starboard beam view of the schooner, ELIZABETH ANN HOWARD, taken from the deck of the schooner HENRY FORD. To the left of the image is a large mast, framed by the boom overhead, leading to the foremast of the HENRY FORD. Three crewmen are seen sitting under the boom looking out over the water from the HENRY FORD, toward the ELIZABETH ANN HOWARD, which is slightly ahead off to the port side. Image taken at the Fishermen's Race off Gloucester, MA. Both the HENRY FORD and the ELIZABETH HOWARD were designed by Thomas McManus. The ELIZABETH HOWARD was older, built in 1916, and measured 148 feet, while the HENRY FORD was built in 1922 and measured 139 feet. The HENRY FORD won the 1923 Fishermen's Race for Gloucester's 300th anniversary, against ELIZABETH HOWARD and SHAMROCK (by Edwin Perkins). For more information see: A CENTURY UNDER SAIL, text by Stanley Z. Rosenfeld, page 46. Negative sleeve stamped: "MORRIS ROSENFELD & SONS / 175 RIVERSIDE DRIVE / NEW YORK, NY 10024 / PHONE (212) 787-6653" and "PHOTO / STANLEY ROSENFELD". 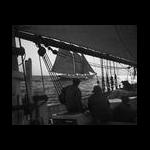