8 x 10 glass plate negative taken by Rosenfeld and Sons. Image taken as part of long term commissioned work and documentation for the American Telephone & Telegraph Company, ranging from 1910 through the 1940s. This negative was taken of a woodcut depicting Alexander Graham Bell lecturing at Salem, Mass., on March 31, 1877. Caption under image reads: "This Wood-cut, Reproduced from the SCIENTIFIC AMERICAN of March 31st, 1877, Shows Prof. Graham Bell Lecturing to an Audience at Salem, Mass. The Inventor is Illustrating His Demonstration by Means of a Telephone Placed Before His Audience and Communicating With His Laboratory at Boston, Four-teen Miles Away." This copy negative was made in 1915 or 1916. Handwritten on original negative sleeve: "2795 / 224--5 / Prof. Bell demonstrating and lecturing to an audience on his original telephone / Box 224". 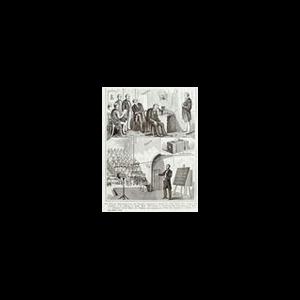