4 x 5 Kodak safety negative taken by Rosenfeld and Sons on October 3, 1948. Like the other C2 cargo ships built by the North Carolina Shipbuilding Company, the FLYING CLIPPER was powered by steam turbines generating 6,600 shaft horsepower to drive the single screw and produce speeds up to 18.5 knots, with a cruising radius of 16,200 miles. Since the introduction of oil-fired boilers around 1910, the use of coal at sea had been almost entirely superseded by fuel oil for firing steam engines. Rather than tending a coal fire, the ship's firemen now turned valves and levers to control the flow of oil and air into the boiler firebox. The FLYING CLIPPER has two boilers, each with several burners like these to project a fine spray of oil into the firebox. The flexible oil lines permit the burners to be removed and cleaned after each four-hour watch. The handle next to each burner operates the air register that controls the amount of air blown through the firebox by forced draft fans to enhance combustion and maintain a hot fire around the boiler's water tubes. Fresh water from the feed-water system is converted to steam as it passes through these tubes. After collecting in the steam drum above, the pressurized steam is fed through the efficient high- and- low pressure turbines that, through reduction gears, drive the propeller shaft. The exhaust steam is then condensed and led back to the feed-water system. The 'black gang' of the engineering department works in a separate world from that of the deck department. The chief engineer, who is equivalent to the chief mate of the deck crew, manages a force of assistant engineers who supervise each watch, firemen to tend to the burners, watertenders to keep the boilers properly full, and utility men called oilers and wipers. Typed on original negative sleeve: 121889F 10/3-4/48 / Isbrandtsen S/S Co / S/S Flying Clipper story / 5030". 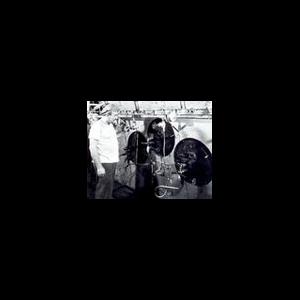