35mm safety negative photographed by Rosenfeld and Sons in September of 1983. Image of John Bertrand and Alan Bond accepting the America's Cup at an awards ceremony at Marble House in Newport, RI. Visible in image: cropped view of John Bertrand on left and Alan Bond on right with the America's Cup trophy on a pedestal between them, the American and Australian flags are to their left, the facade of a house is behind them, an unidentified person (another photographer?) is to their right. For more information see: A CENTURY UNDER SAIL, text by Stanley Rosenfeld, p. 250. Handwritten on negative sleeve: "9-1983 / 194434 / Awarding the A/C Trophy to Australia- John / Bertrand and Alan Bond / A/C 1983 / 87674/C2". CREDIT LINE: Mystic Seaport, Rosenfeld Collection. 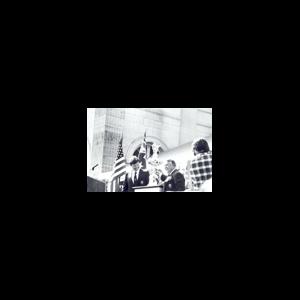