8x10 safety negative photographed by Rosenfeld and Sons on May 24, 1939. This was the inaugural dinner of the Colonel Jacob Ruppert, Jr. Post (Ruppert Memorial Post No. 1226) of the American Legion that was created soon after the death of its namesake on January 13, 1939. Jacob was the brewery's president and CEO who took the brewery to newer and grander heights after the death of his father and brewery founder, Jacob Ruppert, Sr. This event was held at the Bier Stube (also known as the "Tap Room") on the 6th floor of the Brew House Extension, Building E, at the brewery two days after The American Legion granted the temporary charter for the Post, which was made permanent November 11, 1939. The Post was located at the Jacob Ruppert Brewery at 1639 Third Avenue in Manhattan and comprised of mostly brewery employees and friends of Colonel Ruppert. The Ruppert Memorial Post was canceled in 1967, two years after the brewery was closed. Visible in image: American Legionnaires in their uniforms, their wives and assorted men fill the Tap Room at Jacob Ruppert's Brewery. Typed on original negative sleeve: “54697 May 24/39 / 2538-15 / Sutton News Service-424 Mad Ave, City / Dinner of new American Legion Post / at Ruppert Beer Stube“. CREDIT LINE: Mystic Seaport, Rosenfeld Collection. 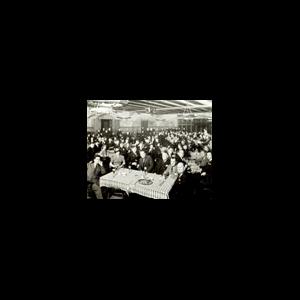