6x8 glass negative photographed by Rosenfeld and Sons August 23, 1923. Image of HUSSAR showing a port view undersail of the 3-masted schooner. This HUSSAR was the 4th owned by Edward F. Hutton. It was designed by Cox & Stevens and built by A.S. Burmeister & Wain in 1923. Her original dimensions in 1923 were: 196'7" x 164' x 33'2" x 14'6". The dimensions were changed in 1927. Electric light added in 1930. Name changed to VEMA in 1932. 1941-1953 owned by various US Government agencies for use as training ship. Later VEMA was converted to a research vessel for the Lamont-Doherty Geological Observatory of Columbia University, Palisades, New York. She was still in use in 1984. She had a dining saloon, smoking room, chart and wireless rooms, four double staterooms and 3 single rooms. Crew compliment was: 7 Officer's staterooms and 2 single with berths for 15 crew and the crew total was 31. She was purchased in 1982 from Columbia University by Windjammer Barefoot Cruises, reconstructed, and renamed MANDALAY. Handwritten on original negative envelope: "8/23/23 / Hussar /Box 208". Typed: "4583-S". CREDIT LINE: Mystic Seaport, Rosenfeld Collection. 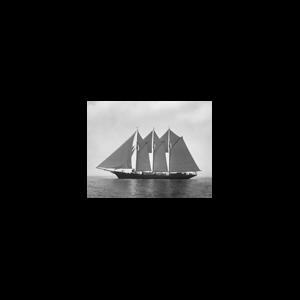