35mm Kodak safety film frame #13 photographed by Rosenfeld and Sons, March 26, 1961 of frostbiting at Larchmont Yacht Club, Larchmont, New York. Half figure view of a woman carrying equipment, a bilge pump and a sail, for use when sailing. Woman is dressed in a heavy jacket and knit hat. Background on the left shows a man standing in foul weather pants. To the right is a stack of dollies which help take the dinghies out of the water later on. Negative sleeve info.: "168436 / 3-26-1961 / Frostbite Larchmont". CREDIT LINE: Mystic Seaport, Rosenfeld Collection. 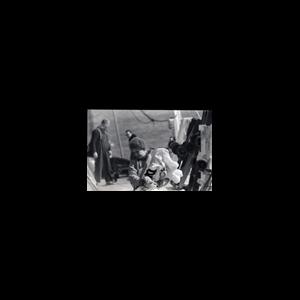