8x10 safety negative photographed by Rosenfeld and Sons on February 4, 1949. Image of aroma testing at Warren Street Coffee House in New York City. Visible in image: view of the interior of a room in the Warren Street coffee house where a man is sitting behind a round table which has been set with cans and bowls of coffee, coffee beans and ground coffee for this person to smell and taste. There is another man to his left with a pot of brewed coffee in his right hand waiting to be poured. There is a small scale on the table with coffee beans in one side. CREDIT LINE: Mystic Seaport, Rosenfeld Collection. Typed on original negative sleeve: “63194 / 2/4/49 / 2892-17 / Isbrandtsen S/S Co / 42 Broadway, City / Interior Warren St Coffee House“. 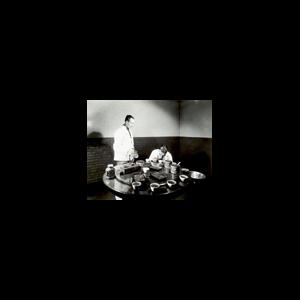 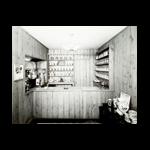 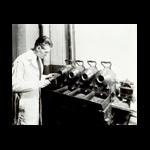 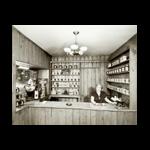 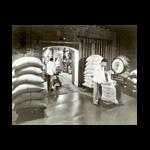