Color stereograph mounted on green card with rounded corners; view of quay in Genoa, Italy with emigrants embarking on unseen vessel(s); printed on front "817. Embarking Emigrants at Docks, Genoa, Italy."; printed on back "N. 817. EMBARKING EMIGRANTS AT DOCKS, GENOA, ITALY." and "In the middle ages the whole energy of the Genoese seems to have been concentrated on com-/ merce and the pursuit of gain. Genoa was a great naval power, but produced no scholars of em-/ inence and possessed no school of art. Its people were hated by the other Italians, who said/ of them, they had "a sea without fish, mountains without inns, men without faith and women/ without virtue." Modern Genoa has partly regained its ancient mercantile importance, though/ its naval arsenal has been trasferred to Spezia. One of its citizens, the duke of Galliera, who/ died in 1876, left $4,000,000 for the purpose of construction a breakwater, and the city trebled/ this sum in building a magnificent new harbor with five miles of quays. About 7,000 steamers/ and 5,000 large sailing vessels enter and clear the port every year. Shiploads of Italian emi-/ grants leave here every week for the United States." and "A8723." 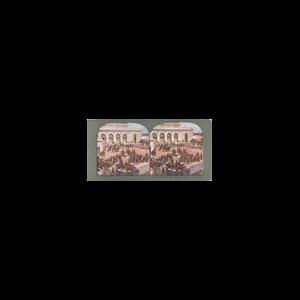