Color lithograph; USS NAUTILUS, SSN 571 (built 1952-1954), inboard/ outboard profile, cutaways showing various areas of the interior and labeled; printed on front top from left to right"CREW'S QUARTERS/ ENGINE ROOM/ REACTOR/ ATTACK CENTER/ BRIDGE/ PERISCOPE ROOM/ CAPTAIN'S STATEROOM/ OFFICER'S WARDROOM/ CREW'S QUARTERS/ FORWARD TORPEDO ROOM"; and "CONTROL ROOM/ CREW'S MESS/ BATTERIES/ STORES/ GALLEY"; printed on bottom center "USS NAUTILUS (SSN 571)"; printed on bottom right "BUILT BY ELECTRIC BOAT, A DIVISION OF GENERAL DYNAMICS CORPORATION"; printed on back "USS NAUTILUS (SSN 571)/ Nautilus, the world's first atomic-powered means of transportation, is also the first 'tru'/ submarine ever built. Requiring no outside source of oxygen for her main propulstion plant,/ she can cruise submerged indefinitely and can stay underwater as long as her crew's endurance/ permits./ Depending solely on nuclear power, she maintains herself as an independent city under the/ sea, an important milestone in man's development and control of atomic energy for peaceful/ industrial uses./ She is approximately 300 feet long with a beam of 28 feet. She displaces about 3,000 tons/ and cruises at speeds in excess of 20 knots submerged. High-pressure water flowing over the/ ship's reactor produces steam in an adjoining but separate system. The ship is then proppelled/ by a steam turbine./ Every possible comfort and convenience have been provided to help increase the endurance/ andn efficiency of the ship's personnel, including color schemes designes to reduce tension and/ fatigue during long underwater cruises. There are also recreational facilities such as a motion/ picture projector and a record player./ The keel of the Nautilus was laid by President Harry S. Truman on June 14, 1952. The ship/ was christened by the wife of another President, Mrs. Dwight D. Eisenhower, on January 21, 1954./ The Nautilus made her first voyage on January 17, 1955 when she flashed the historic message/ 'Underway on Nuclear Power.'" Enclosed in portfolio 2003.92.22. 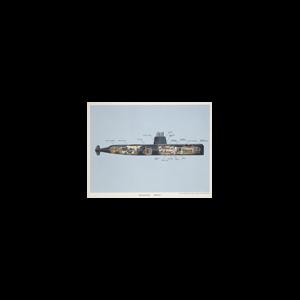 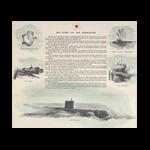