Photograph; black-and-white photograph of the stern of VANITIE (built 1914) extending beyond the dock in George Lawley & Son Corporation yard, Neponset, MA; port profile view of the stern of VANITIE as she extends beyond the dock, photo taken from shore or another dock, stern lines extend out of frame, men on dec and on end of dock, boom has been removed; handwritten at bottom of image "Vanitie". 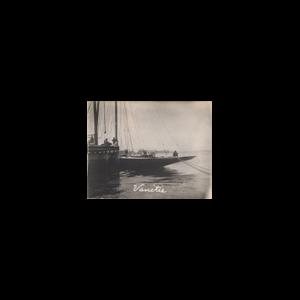