8x10 in. black-and-white silver gelatin photograph, originally photographed by Richard Pratt Sylvia, mounted on black photograph album page in 1943. Image of a sailor painting insignia on auxiliary schooner ABENAKI, as CGR-3032 in the summer 1943. The sailor is sitting in a workboat next to the bow of ABENAKI, holding small can of paint and paintbrush and the insignia is a cartoon depiction of an Abenaki Indian in headdress, vest, moccasins and tomahawk stomping on a German submarine. Insignia is painted forward of the CGR-3032 insignia. Object is included in photograph album 2007.44.2. Print reproduced from original negative (1997.108.116) by Richard Pratt Sylvia. CREDIT LINE: Mystic Seaport, Richard Pratt Sylvia photographer. 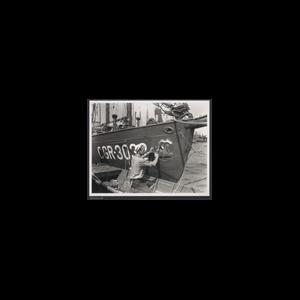