35mm slide photographed by Rosenfeld and Sons in February of 1978. Image is a closeup of the bow, starboard side, of RUNNING TIDE's red spinnaker and sails in the foreground and of SIRONA's spinnaker, in the background to the left. which has yellow and medium blue horizontal stripes. RUNNING TIDE, sail #4444, was an ocean racer that participated in many long distance races in the 1970's. She was a 60'6" auxiliary sloop built in 1969 by Huisman of Vollenhove, Netherlands from designs by Sparkman & Stephens, Inc. and owned by Albert G. Van Meter in 1978. SIRONA was a 48' auxiliary yawl, sail #21313, and believed to be a Swan 48 built by or before 1978. She was designed by Sparkman & Stephens and built by Oy Nautor Ab Company of Finland and her owner in 1978 was James Michael. Mount info. stamped: "(black) 29 / FEB 78N7". Manufacturer's info.: "Kodachrome TRANSPARENCY / PROCESSED BY KODAK". CREDIT LINE: Mystic Seaport, Rosenfeld Collection, Stanley Z. Rosenfeld photographer. 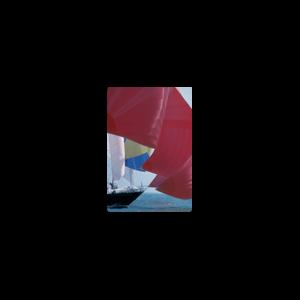