35mm color slide photographed by Rosenfeld and Sons probably in June of 1958 during a shakedown cruise of COLUMBIA, US16, sometime after her launching which was on June 2nd on Long Island Sound. Close up view on board port side photographed from on deck of crew members working on COLUMBIA's jib. The man in the striped shirt is believed to be Briggs Cunningham. COLUMBIA was a 69'7" 12 Meter sloop, sail #US16, built for the America's Cup defense in 1958 by Henry B. Nevins, Inc. of City Island, NY from designs by Olin Stephens of Sparkman and Stephens and rigged by Rod Stephens. Her first owner was the Henry Francis Sears Syndicate of the New York Yacht Club. COLUMBIA sailed 40 trial races in 1958 and was skippered by Briggs Cunningham. Mount info. handwritten: none. Processor's stamp: "PATENTED / MADE IN U.S.A.". Manufacturer's info. on verso: "MU 7-1396 / PROCESSED BY JACK WARD COLOR SERVICE / 202 EAST 44, N.Y.". CREDIT LINE: Mystic Seaport, Rosenfeld Collection. DUP 1 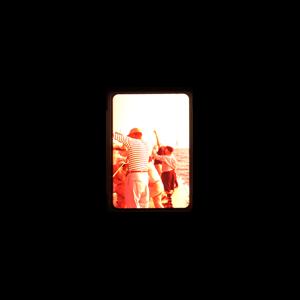