35mm color slide photographed by Rosenfeld and Sons probably in May or June of 1958. Close up view taken on deck of some of the crew on board WEATHERLY raising the mainsail. The man in the striped shirt helping with the sail is believed to be Briggs Cunningham. The woman in the cockpit to the right is Mrs. Henry D. Mercer and behind her with his back to the camera is Arthur Knapp. The partial view of the man at the wheel is Mr. Henry D. Mercer, the owner. WEATHERLY, US #17, was a 69' 12 meter sloop designed by Philip L. Rhodes and built by Luders Marine Construction Company in 1958 for Henry D. Mercer, Arnold D. Frese and Cornelius S. Walsh of New York. She was built as an America's Cup potential defender and her skipper was Arthur Knapp, Jr. Mount info. handwritten: none. Processor's stamp: "PATENTED / MADE IN U.S.A.". Manufacturer's info. on verso: "MU 7-1396 / PROCESSED BY JACK WARD COLOR SERVICE / 202 EAST 44, N.Y.". CREDIT LINE: Mystic Seaport, Rosenfeld Collection. 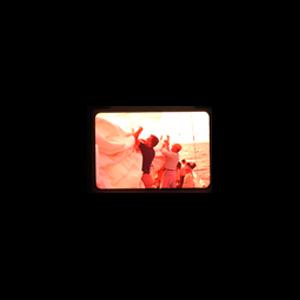