35mm color slide photographed by Rosenfeld and Sons in August of 1962. Image of WEATHERLY, #US17,starboard side forward, with a blue top and white bottom spinnaker set and close-hauled white main. Several crewmen, wearing medium blue tops and white pants or shorts, are working the lines for the sails on deck. The U.S. Navy harbor tug, ENSENORE, #YTB-217, is in the background and the stern can be seen to the right of WEATHERLY's bow as she passes the tug. WEATHERLY was a 69 ft. 12 meter sloop, designed by Philip L. Rhodes and built by Luders Marine Construction Company in 1958. For the 1962 America's Cup defense, WEATHERLY's skipper was Emil "Bus" Mosbacher. Her design was modified by A. E. Luder, Jr. for the 1962 challenge. ENSENORE was a large harbor tug, hull #YTB-217, built by or before 1944 and operated out of Boston, Massachusetts and served in a noncommissioned status through 1962 for the U.S. Navy. Mount info. stamped: "MADE IN U.S.A. / (red) 4 / AUG 62N". Manufacturer's info.: "Kodachrome TRANSPARENCY / Processed By Kodak". CREDIT LINE: Mystic Seaport, Rosenfeld Collection. 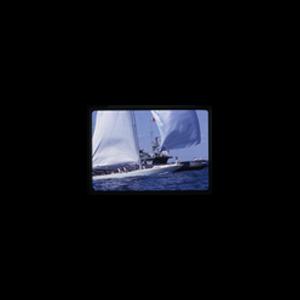 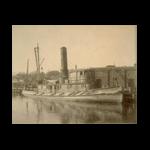