35mm safety filmstrip, frame #18, photographed by Rosenfeld and Sons during the time of the America's Cup Races in September of 1964 off Newport, Rhode Island. Image of the CONSTELLATION undersail, bow on with spinnaker set and mainsail reaching. CONSTELLATION was a 12 metre 68'5" sloop, sail #US20, built in 1964 by the Minneford Yacht Yard on City Island, New York from designs by Olin Stephens of Sparkman & Stephens. She was the successful US defender for the America's Cup in 1964. Neg. sleeve info. stamped: "177840 / AMERICA'S CUP 1964". CREDIT LINE: Mystic Seaport, Rosenfeld Collection. 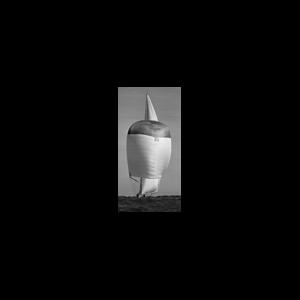