35mm color slide photographed by Rosenfeld and Sons during the time of the America's Cup races held from September 15th to the 25th, 1962. Image of WEATHERLY, #US17, left, windward and ahead of GRETEL, #KA,1, on a starboard tack close-hauled with the crew on the rail. WEATHERLY, US #17, was a 69 ft. 12 meter sloop designed by Philip L. Rhodes and built by Luders Marine Construction Company, of Stamford, Connecticut in 1958 for Henry D. Mercer, Arnold D. Frese and Cornelius S. Walsh of New York. For the 1962 America's Cup defense, WEATHERLY's skipper was Emil "Bus" Mosbacher. Her design was modified by A. E. Luder, Jr. and her sails were cut and altered by Ted Hood. GRETEL was a 70' 12-Meter sloop, #KA1, built by the Australian syndicate to challenge for the America's Cup in 1962. Her designer was Alan Payne and the vessel was built by Lars Halvarsen Sons of Sydney, Australia. The "coffee grinder" winches were designed by Alan Payne and first used aboard GRETEL in 1962. The skipper, Jock Sturrock, with a new navigator and a crew of 12 who had never worked together before raced the America's Cup 1962 race. Mount Info. stamped: "MADE IN U.S.A. / (black) 24 / SEP 62N". Manufacturer's info.: "Kodachrome / TRANSPARENCY / Processed By Kodak". CREDIT LINE: Mystic Seaport, Rosenfeld Collection. 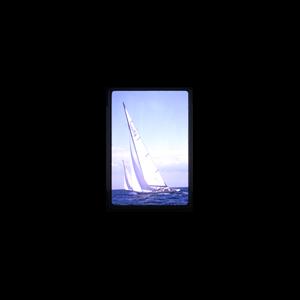