Sewing Box; Chinese sewing box; from the collection of Captain Richard C. Mears (1829-1899); wooden sewing box, decorated on the outside with chinese motifs in gold (images depicted include pagodas, plants, water, and two men); small key hole on front used to lock the box; two hinges on back of box connecting the lid to the body; interior of box is open, with a shallow, removable tray situated inside; tray has 14 smaller compartments; four corner compartments were at one point covered with ivory pieces which had large and small holes in them, most likely used for holding spools of thread and needles; two larger side compartments have small lids which are able to be lifted off completely by small handles on top of lid; each lid is decorated with a painted, gold-colored design; center compartment has an ivory piece consisting of a narrow staff attached to the wooden sides of the compartment, with three disks spaced evenly apart on it; thread is wound inbetween these discs, including an ecru color, as well as blue; the ecru thread is also wound around a flower-shaped thread winder; in the compartment in the front, center section of the tray is another ivory piece similar to the one above it, except with only one disc that has projectile features; this ivory piece has pink thread wrapped around it. 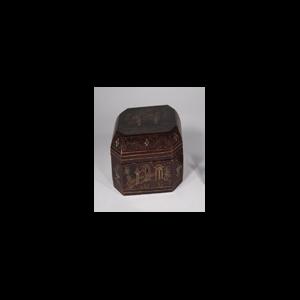 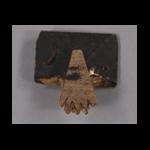